A History of Shutters

Call us for a free quotation on

A History of Shutters 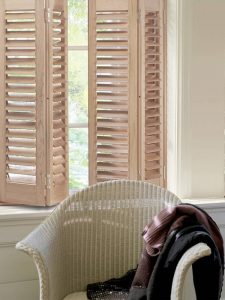 Shutters have always been a vital feature of many historic homes throughout the medieval period. During this time, when most windows were unglazed, shutters helped to keep out wind, rain, insects and birds. However, during later periods when homes boasted fireplaces and glazed windows, shutters offered extra draught-proofing and privacy.

In this article, the team here at Boyd’s Blinds will be taking a look at the history of shutters in greater detail, looking at early examples right through to today.

Medieval stone buildings which housed the rich would often have hinged shutters, regardless of whether the windows were glazed. This is because the extra layer over the window would provide more warmth, and also a barrier to anyone who would try and spy on the aristocracy! An early example of this would be the Queen’s chamber at Guildford Castle which, in 1245, had glazed windows with opening casements and internal shutters. In Henry III’s liberate rolls, there is reference to shutters of fir in his living quarters, painted with the royal arms.

The rise of glazed windows

Towards the 16th and 17th century, evidence suggests that the increased use of glazing may have caused internal shutters to be abandoned in many homes. That is, given the advancements in glazing, the warming properties of shutters simply became obsolete. For example, many oriel windows installed throughout the 17th century were glazed, but they retain no evidence of shutters.

External shutters, however, continued to be popular throughout Europe and America, chiefly due to their ability to protect the exterior of windows from the elements and also to offer the homeowner privacy.

Georgian shutters were perhaps one of the most distinctive features associated with Georgian homes. These internal shutters fold back into architraves to form the window reveals and were far more decorative than shutters found in the early medieval period. Some featured decorative H-hinges and butterfly hinges, while panels were pierced with ovals, circles or hearts to allow light through, even when the shutters were closed.

Today, while shutters do offer excellent utility when it comes to light control and window protection, shutters are prized primarily for their ability to elevate the aesthetic of our home. Wooden shutters can add a wonderfully natural feel to any room; they can turn a bathroom into a little sanctuary, and a living room into a cosy grotto. They are available in a variety of different materials and styles, and are an excellent alternative to modern blinds or curtains.

If you are in the market for some shutters, Boyd’s Blinds are here to help. We offer a beautiful array of shutters throughout Bulwell, Carlton, Southwell, Mansfield, Newark, Lincoln, Grantham, West Bridgford and the wider Nottinghamshire area. We are a family-run business dedicated to taking the hassle out of purchasing window treatments, with our offers of free home visits and fittings guaranteed to make the whole process as stress-free as possible. So, for a premier service when it comes to purchasing new window treatments for your home or business, contact our friendly team today!